Friday practice sessions forced the team to work late into the night to change the cars geometry to suit the banked oval part of the circuit.

Saturday qualifying justified the late night with all 5 cars heading the top 5 slots on the grid.

The race saw the Lotus from pole position take a commanding lead, but with the 20 sec added penalty to the pit stop and a drive through penalty, this brought all the cars closer again.

When the chequered flag fell at the end, it was the works Lotus crossing the line first, followed by the 4 Astons, Chris Kemp, Tom Black, David Tinn & Robin Marriot.

For the team it was the first time ever they have had 3 drivers on the winner’s podium together & the first time all of the team’s cars crossed the finish line in the top 5 positions!

Thanks to all the drivers and to Gavan Kershaw for again showing the pace of the works Lotus.

The team principle Roger Bennington, commented after the race that it was a very proud day for him and justification for all the investment and hard work by all his staff. 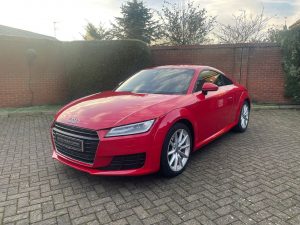 £81,995
Year: 2013
Aston Martin Vanquish (2013)
We use cookies on our website to give you the most relevant experience by remembering your preferences and repeat visits. By clicking “Accept”, you consent to the use of ALL the cookies.
Cookie settingsACCEPT
Manage consent